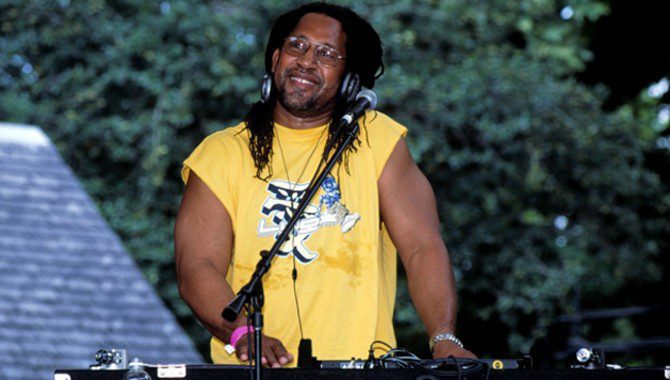 Born Clive Campbell in Kingston, Jamaica on April, 16th 1955, DJ Kool Herc moved to the Bronx, New York City at the age of 12. Having been exposed to both Native American and Jamaican music, DJ Kool Herc’s love for music in the mid-70s saw him start to stage parties inspired by the African American experience whilst integrating global youth culture and is credited for being the originator of Hip-Hop through his “Back to School Jam” eventually he became known as the “Father of Hip-Hop”

In the summer of 1973 having refined his style of break-beats for a substantial amount of time, the opportunity to showcase to his biggest crowd ever presented its self at his sister’s birthday party using his dad’s sound system. The phenomenal party ignited a grassroots musical revolt more than half a decade before the word hip-hop even existed in the urban vocabulary.

DJ Kool Herc inspired by multiple genres of music played hard funk records, soul, rock, reggae, and dancehall. The likes of James Brown were a great inspiration to him. He learned to separate the instrumentals from the drum beats in songs and tactfully switch in between breaks. A skilled turntablist, DJ Kool Herc would prolong the break using two versions of the same record.

The basis of hip-hop music embraced breakbeat DJing utilizing funky stand-alone drums and rapping came about when DJ Kool Herc would make syncopations and rhythmically spoken announcements urging skilled dancers to take to the podium. The dancers were known as breakdancers or simply b-dancers.

Unlike his contemporaries like Afrika Bambaataa and Grandmaster Flash who took on his style, improving and advancing it to tap on the commercial aspect of hip-hop records in its infancy, DJ Kool Herc decided to steer clear of that path even though he considered them heroes.

Fortunate enough that his father had an extraordinary sound system, DJ Kool Herc would borrow it to stage dusk until dawn block parties in the Bronx which earned him notoriety in the entire New York touring and staging several club performances to a broad audience where his hype-men would rhythmically recite rhymes over the microphone. The rapping and break dancing at performances would excite the audiences.

Though he is credited for birthing hip-hop attributed to the easy to rap to drum breaks of soul and funk records, the music feel of hip-hop is something he does not claim credit over. He took advantage of his father’s playing in a band in the early 70s to learn how to spin records emulating Jamaican selectors who often toasted over records therefore as far as hip-hop is concerned DJ Kool Herc’s contribution is instrumental even though rapping was not the core.

DJ Kool Herc keenly observed how crowds reacted to the several segments of the records he played noticing the great anticipation for particular sections such as to dance at drum breaks.

DJ Kool Herc released his first vinyl record ever with DJ and music Producer Mr. Green. Calling it the “Last of the Classic Beats” in May 2019 which album was critically acclaimed.

Typical of music, other genres of music paved the way for hip hop which evolved and was chiseled by its practitioners. Birthed in the New York borough of the Bronx, hip-hop saw its first day of life when DJ Kool Herc presided over his sister’s birthday party on 1520 Sedgwick Avenue on August 11, 1973.